The Saints Tour: Greater Braddock (2015) was RealTime’s first work as a producing entity, in collaboration with Pittsburgh’s Bricolage Production Company. But the roots of the project go waaay back. On the 10th anniversary of the project’s life, RealTime Artistic Director Molly Rice traces the history of this unique, far-reaching and long-lived project.

I told my students this semester that if I died tomorrow, I would feel OK, because I would know I had made one complete, truly connective thing. That’s the SAINTS TOUR. As Spring of 2019 melts into Summer, I want to acknowledge this work in my life that’s brought me the greatest extended joy and connection, that turns 10 years old this year. 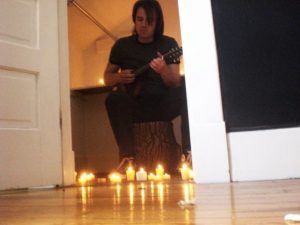 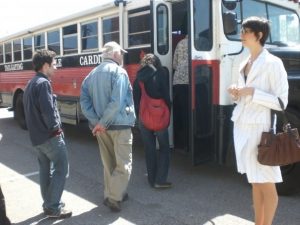 In the early part of 2009 I wrote this site-specific, processional play based on Medieval miracle plays, whose structure I was into at the time. Since then, the play has been fully rewritten for each community in which it occurs. But originally I wrote it for Louisville Kentucky, for rockstar Raymond Rizzo‘s then-new Motherlodge Live Arts Exchange. I wrote it because he asked me to, and I knew Motherlodge was in part a love letter to his hometown. So having never been there (we didn’t have a budget for travel; we didn’t have a budget period) I used Ray’s musings about Louisville and Google Map View to create a path from which, in the play, extraordinarily empathetic, kind, quietly life-shifting beings called “saints” are said to have emerged. The tour traveled through the unsung corners of Louisville on a tiny band tour bus that Ray found for us. It was magic.

Emily Kicklighter originated the role of The Tour Guide, directed by Marc Bovino (now of The Mad Ones). So many special people were part of it: Scott Anthony; Mauriece Hamilton; Tyrone Cotton; Amber Estes Theineman, Adam Toussaint, Timothy Tucker— all of whom have continued on to do amazing things in life and in art.

The homeless chefs-in-training made dinner for the audience after each show at the Salvation Army soup kitchen, which made community partnerships an inextricable part of the project. 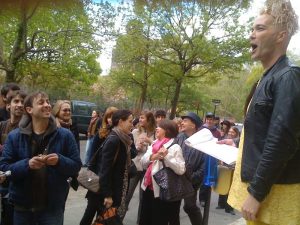 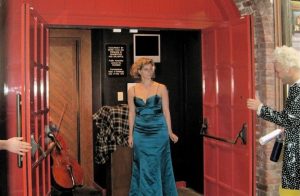 Our partnerships increased to include Jefferson Market Garden, Cherry Lane Theatre and Judson Memorial Church – New York City, where I met spiritual warrior Micah Bucey whom you all should know. Audience gathered for a donated meal from Lifethyme Natural Market after the show; in the heart of Manhattan, generosity flows. 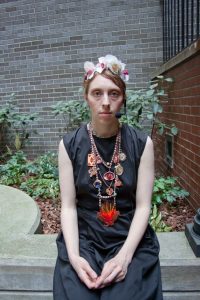 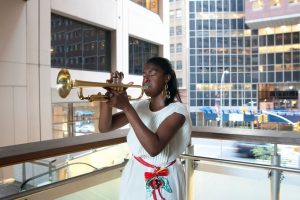 In 2012, thanks to Andy Horwitz & the Lower Manhattan Cultural Council, we did the show smack dab in the middle of Occupy Wall Street. The luminous Crystal Finn played our Tour Guide and Maureen Towey (since then a producer of the New York Times’ Daily 360) directed. Mohammad Yousef (now of Target Margin Theater) helped produce, and designers Simone Duff and Sarah Maiorino created all our ridiculously gorgeous relics. Lower Manhattan came alive with musicians like Carrie Erving and Chris Loxley of Ponyhof, trumpeter Shanelle D. Jenkins, the dual tubas of Santino Lo and Lorenzo Wolff, Forrest Paquin, instrument designer Ben Simon, and horn player Wayne Tucker. (So much brass–somehow fitting for Wall Street.) 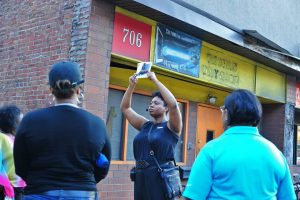 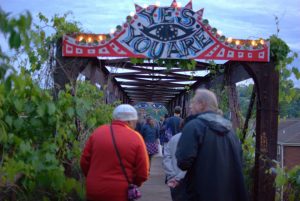 And finally in 2015, the TOUR touched down in the mill town of Braddock, PA. Audiences school-bussed and walked through this mill-shadowed, magical terrain with Bria Walker as our guide. Along with Bricolage Production Company, Real/Time Interventions (my then brand-new company with Rusty Thelin) spent 2 years in Braddock, connecting with locals like Phyllis Brown, Mary Carey, Jeb Feldman, Gisele Barreto Fetterman (now Second Lady of Pennsylvania), John Hempel, Laura Ramie, Brendan Renne, and Chef Kevin Sousa (now of Superior Motors), and partnering up with the Braddock Carnegie Library, Grow Pittsburgh, Gardweeno, Monongahela Cemetery (hands down the most beautiful place in PGH), UnSmoke Systems and the Braddock Youth Project. 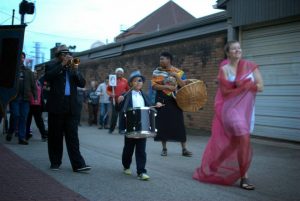 The Parade, with Seth and Nathan Barnes, Bria Walker and Jessica Bryant. Braddock 2015.

Along with Braddock performer TaeAjah Cannon-Barnes, violinists Cara Garofalo and Jennifer Sternick and aerialists Jessica Bryant and Kristin Lyndal Garbarino, an amazing family of Braddock residents– trumpeter Sanford-Mark Barnes and his three boys Nate Cannon-Barnes, Isaiah Gorman (graduating with honors today!), and Seth Barnes carried us through the neighborhood every night with their music and word-art.

The show featured a parade every night with Braddock residents and the audience, who carried signs that local teenagers had made of friends and loved ones they thought of as Saints. 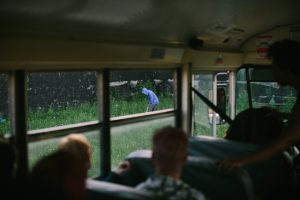 One of those not-yet ascended Braddock saints was teenager Antwon Rose II, who we connected with through our work on the TOUR. Last year he was shot in Braddock by a police officer while he was running away.

He bears a striking resemblance to the “Patron Saint of Braddock” character written in the show, Saint Javon, who in the show wears a hoodie and is seen all over town mysteriously digging in the dirt. I wonder if Antwon is perhaps the person that the character Saint Javon was standing in for– or just one of the Braddock “almost-men who die for nearly nothing”, as the script says.

He is embedded as a Saint in this work, as a tragic example of the message the piece attempts to carry— about destructive assumption, brutality, sacrifice, the cost of human pain, and forgiveness.

A lot can happen in 10 years. People’s careers grow, or are set aside for families or the challenges of life. People start doing their art again, or stop. People die (RIP Saints Tour Braddock documentarian James Patrick Dames) and are born. The show itself sparked at least one marriage, between Rusty Thelin and me on May 1st, 2015, in Monongahela Grounds Cemetery, and our first Saints Tour baby that we know of: Kenai Cannon-Barnes, born to TaeAjah Cannon-Barnes and Nate Cannon-Barnes, who got together while working on the project. Each time it touches down, THE SAINTS TOUR is a snapshot of a hugely diverse group of talented people, a sort of live collage of their original artistic stamp on a particular place and time. I love that.

What I’m most proud of is that it brings together and celebrates so many extraordinary artists, local and international, sung and unsung, traditional and unusual, in each and every journey.

My deepest thanks to all of you who’ve been a part of this pilgrimage. Special thanks to Morgan Jenness and Mark Russell, who helped shepherd it on its way. If I have forgotten to name you, please forgive me, and know that you’ve contributed to something that’s meant a lot to a lot of people– including me.

PS: The TOUR continues. RealTime is currently considering productions in the South, on the East Coast, and one here in Pittsburgh, involving the refugee community. Let me know if you think your community could benefit from one. Here’s to ten more years, and beyond. 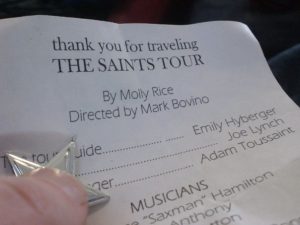