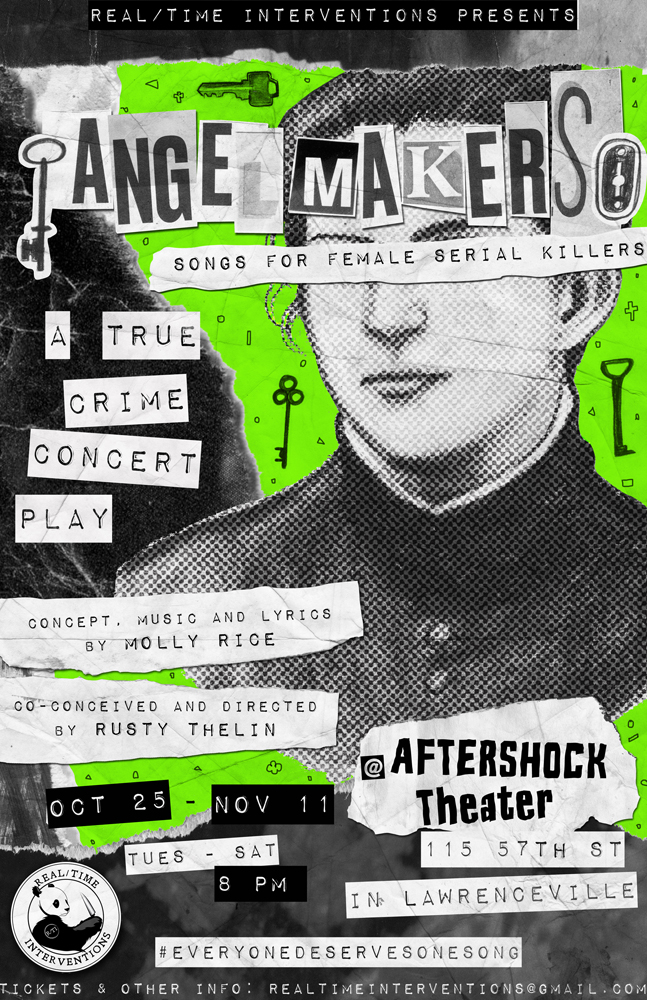 “‘Angelmakers: Songs for Female Serial Killers’ is no dinner-theater hokum, nor is it a theater-of-cruelty thriller. It’s thoughtful, careful, restrained and — surprisingly — beautiful. There’s talent to spare in this production…[Milia Ayache] is captivating for every moment, singing with dynamic aplomb and…sympathy, abandon and even humor…Rice’s music does cartwheels to accommodate both the depicted killer and the angle of the lyrics. They should put out an album; if they sold CDs in the lobby after the show, audiences would undoubtedly line up for them.”
–Sean Collier, Pittsburgh Magazine {read full review}

“The…gritty space is enhanced by the fresh smell of old plaster dust and the hum of a portable propane heater. There is the feeling of a being in a haunted house as you enter the performance space, perhaps the ghosts of the killer’s victims are in the audience as well seeking the explanation for their fate?…Theatre is a constantly evolving art form, [and] Pittsburgh is fortunate to have companies like Real/Time Interventions and spaces like Aftershock Theatre to push that evolution ahead.”
–George Hoover, Pittsburgh in the Round {read full review}

“If it’s provocative to have empathy for killers, the troupe pulls it off, thanks largely to Rice’s lyrical gifts… and Ayache, an arresting presence, showcases her vocal chops in the Gypsy-inflected title track.”
— Bill O’Driscoll, Pittsburgh City Paper {read full review}​